Recollections of a Trolley Fan 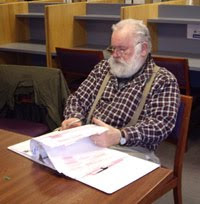 Many of us at Seashore grew up riding and seeing trolleys – an experience that the younger generation has not had, unless they live in Boston, New Orleans, San Francisco, or others of the few cities that still have trolleys. One of the things that almost no one of the present generation can experience are the huge networks that once existed.

This writer had the rich experience of discovering Pittsburgh in the early 60’s when much of its electric railway system was still intact. It was incredible – standing on just about any corner in downtown and boarding the first car to come along.

“Le’s see where this goes…” and I was never disappointed. There were so many lines that it seemed that just when you thought you had ridden them all, along came another one you didn’t know about.

I will never forget walking down the street in McKeesport, Pa., where we were performing on a river barge with the American Wind Symphony. I knew all about the “56 McKeesport” line, had ridden it many times. It was a delightful line that used to go cross country along grass-grown tracks amid morning mist and hollyhocks. So imagine my surprise in McKeesport when along came a car signed “98 Glassport”. A new line – one I had never heard of! It turned out that it was a connecting line from McKeesport to Glassport that never got near downtown so it was no surprise I had never heard of it. In those days, I didn’t know any other trolley fans who would have had maps and other things.

Another time I boarded a car downtown about 8 or 9 o’clock at night. The car went across a bridge across a major river, and soon began climbing a hill through quaint neighborhoods. Then it made a sharp turn and began climbing an even steeper hill. I have since learned this was the steepest hill in Pittsburgh and had a fleet of cars with special gearing made just for that line. 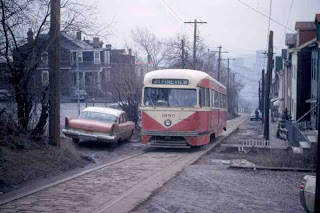 The car made a couple sharp turns and went along some narrow streets where you were a couple of feet away from people sitting in their kitchens or living rooms watching TV. Then – wonder of wonders! – it was no longer narrow streets but brick paved track through the woods. Branches scraped the right side of the car, then branches scraped both sides, but we were still on that paved single track. The climax of this adventure was when we went over a little hill and scraped the bottom of the car. I thought I had disappeared into some kind of parallel universe. The car finally arrived at an intersection on a busy street back in civilization and reality.

It turns out the line was the very famous ’21 Fineview’ and the darling of trolley fans the world over. What a great experience to discover it without ever hearing about it before hand.

Fans of an even older generation than this writer got to experience the “interurbans” – high speed intercity trolley that largely disappeared in the Depression. I got to ride a few survivors – the “North Shore” from Chicago to Milwaukee, and the “Roarin’ Elgin”, the Chicago Aurora and Elgin. Those were both unusual in that they went to the loop in downtown Chicago over the Chicago elevated tracks. Imagine standing on the “El” tracks in Chicago waiting for your train when along comes a large train of interurban cars. 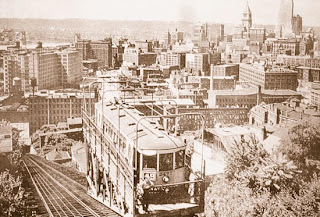 Another experience a lucky few had was riding the incline in Cincinnati. That to my knowledge was the only city in the world where the trolleys went on the incline. There was the line “49 Zoo – Eden” that went up the incline to the top of Mt. Adams, through the woods in Eden Park, and ended up at the Zoo. I was quite young, but remember how exciting it was to be able to get off the car and watch the city below as we were pulled up the steep hill. I remember how neat it was to get back on to the car without having to pay another fare. There was an effort when the incline closed to save it, but it wasn’t successful. What a shame – it could have been a world famous historical landmark.

Experiences like the above are why we volunteers at the museum work so hard to give people a small taste of the very short-lived but wonderful world of trolleys.